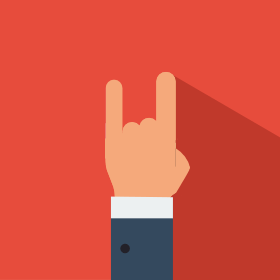 Ah power chords... The backbone of Rock 'n Roll history! No wonder they’re often one of the first things any guitarist will learn. It allows you to play loads and loads of easy songs.

Because they're so popular, being able to recognise power chords by ear is an incredibly useful skill to have and will make you much better at learning songs by ear in general. This site is all about those essential music skills, so in this article, I'll share fifteen power chord songs with you and provide help to learn them by ear.

For this article I'll give you the following hints:

All the hints are hidden by default, but just press the blue buttons and they'll appear!

In case you don't know what a power chord is, it's not that hard. It's a chord that consists of only two or three notes and is played on the lower strings of your guitar (E, A and sometimes D). The shape is always the same and you can move it around to make different kinds of power chords. Here's are two examples:

But you can also play a power chord that consists of two notes:

That's pretty much it!

For this article, I've started with the more easy power chord songs and move on to the slightly more involved riffs. Lastly, you might want to check out this step-by-step guide to learning riffs by ear.

Want try it? I’ve created a mini-course for you to check out. It has four songs (including 7 Nation Army by the White Stripes and Otherside by the Red Hot Chili Peppers).

Check out 'Make Your Ears Awesome'!

1. Queens of the Stone Age - Go With The Flow

To start, here's the ruthless power chord accompaniment of QOTSA's go with the flow! To get this really heavy sound, they've actually tuned down a guitar to C (so all the strings sound four frets lower). But you can also play the same part on a guitar that's tuned normally.

This classic riff by the Kinks is simple but effective!

Back to the late nineties! Check out the intro to this one and you'll have most of the chord for the whole song!

This song alternates between a power chord riff and a single note riff. The power chord riff starts at 27 seconds (where I've timed the youtube clip to start) and then on the verse is almost the same melody but played with just one note.

For the two short intro power chords, start on the low E string. For the main riff, start on the A string!
The seventh fret!
Right here!

This song shows how you can take a few simple power chords and make it into something by using an interesting rhythm!

The low E string!
The third fret!
Check out this tab!

Couldn't leave this one out. The chords are quite simple, but it can be tricky to get the rhythm right!

It's almost like you're listening to to Queens of the Stone Age... but this one's from 1977! Great riff!

The low E string!
The second fret!
Check this tab where it says 'Verse I'!

The A string!
The third fret!
Right here!

Another classic by the Kinks!

Fun fact: the song counts off in Spanish as 'one, two, three, fourteen!'

The A string!
The fifth fret!
Right here!

A classic by German Rock band the Scorpions. From their ninth(!) studio album.

The A string!
The seventh fret!
Right here!

Chances are you've never heard of this Belgian band, let alone of this catchy, almost completely instrumental song. The guitar comes in at about 15 seconds!

The A string!
The third fret!
Right here!

If this one feels a bit weird, it's because of the rhythms (as the song title might have suggested to you already)! The guitar in the intro (the first seven seconds) is all power chords! There's a second guitar that comes in next sounds like it does too, but is slightly different.

The A string!
The third fret!
Check out this tab!


14. The Offspring - Pretty Fly for a White Guy

This might've been the first power chord song I ever learned. So I couldn't leave it out!

The A string!
The second fret!
Check out this tab!

And one of the most famous riffs of all times to finish up! Might take some more practice to play this one smoothly!

The A string!
The open string!
Right here!


Power Chords and Beyond

One of the most important skills a guitarist can have is to be able to glance at a bunch of chords and instantly play them. Whether those are power chords, major chords or minor seven chords. With Guitar Chord Bootcamp, you’ll learn exactly that. Here’s what it’ll help you do:

You can check it out for free:

Get the Free Lessons


Hope you enjoyed these power chord songs and (most of all) that they helped you improve your ears. If you need any help or have suggestions for other songs, feel free to email me at Just[at]Stringkick.com!